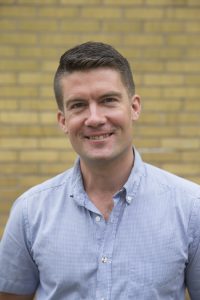 Kjell Olsson is a registered dietitian. He holds a BSc in Dietetics from Umeå University (2005) and a MSc in Public Health (MPH) from Lund University (2015).  In 2017, Kjell began his part-time PhD studies in the Nutritional Epidemiology group.

Kjell has previous experience working in primary, elderly, and tertiary care, as well as managing a project with the aim to improve nutritional care for the elderly.  Kjell has also worked as a project coordinator for the unit of Social Medicine and Global Health at Lund University. Since autumn of 2016, Kjell has been working for Region Skåne as a project leader for the Centre of Excellence focusing on lifestyle and disease prevention (Kunskapscentrum).